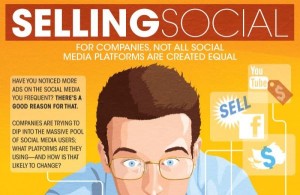 So…social media. The holy grail of online business promotion, it seems. Quite frankly, if you’ve ever been pitched by a PR agency of any kind via a generic email then you’ve noticed that they generally try to sell you on two things. Usually goes something like this:

(1) We will help you to grow your traffic and exposure by applying top-notch SEO techniques that Google loves.

(2) We will include cutting-edge social media promotion to get you hundreds of engaged followers itching to buy your products and use your services.

Although the SEO part is well-known to be a huge factor in any online business’ lifespan, there’s not that much info regarding the actual effectiveness of social media. At least for the average (online) business.

This is something Social Media Examiner decided to look into in their “2013 Social Media Marketing Industry Report.” The results are quite interesting…

(Scroll down to see a nice infographic created from the Social Media Examiner’s data.)

As it turns out, the main goal for businesses using social media is to increase exposure, then traffic, then a handful of other things, and finally the list is closed by improving sales. The fact that social media is not good at direct selling is very likely the first thing any business discovers soon after launching their social media presence…

Now, about the individual platforms businesses use. No surprise here, Facebook comes first on the list, followed by Twitter. Next, there’s LinkedIn, and then, YouTube. The only thing that’s kind of surprising is a relatively low position of photo sharing sites like Instagram. While they are highly used by the general public, businesses are not that crazy about them.

But what about measuring the exact effects social media can bring to your business? Quite interestingly, only one in four marketers measure their ROI with social media in any way. In other words, everyone’s on social media, but the majority has no tracking mechanisms implemented.

Should you join the game?

If your business doesn’t have a social media presence yet then yes, you should join the game. According to Social Media Examiner, 92%+ of marketers indicate that social media increases exposure for their businesses with a relatively low amount of time spent doing active social media work.

The best idea would be to start by tuning up your profiles on Facebook, Twitter, and LinkedIn to showcase your brand better and make it more interesting to the general audience.

Then, set up a basic tracking system, for example by hooking up your social accounts to a tool like Buffer. Additionally, to get some automation going, you can also check out IFTTT – it creates connections between various social platforms and sends updates between them based on a set trigger.

No one actually has any “right solution for social media” so you’ll need to experiment with the way you’re presenting your business and the things you post on your social profiles. I guess it all comes down to testing, like with all other marketing methods.

As promised, here’s a nice infographic that illustrates the data from Social Media Examiner’s report (source):

What’s your take on this? Do you use social media as part of your business promotion?

The Real Truth About Social Media for Business | newInternetOrder.com